After last week’s offering from Dominic, here’s a poem from another participant at the first workshop I ran in my role as Brent Poet Laureate. It’s by a fantastic local writer called Sam Burcher – you can find out more about her, and the book she’s just published at her website here… 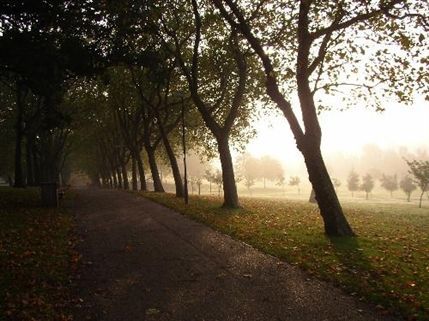 A green haze shimmers over distant goal posts and tennis courts.
I cross the field to the crack-crack sound of ball against bats
Feeling the tiny tremors of caterpillars and worms beneath my feet,
And the rumble of a goods train through Dudding Hill Junction.
I am a witness to the last vestiges of Gladstonbury; a full nappy, shards of broken glass, a flipped off bottle top and a pink metal bangle.
Gladstone Park is a microcosm of the universe enjoying more of itself.

The banner says, “We haven’t stopped fighting”
Across the boarded-up doors of Cricklewood Library, on the park’s periphery,
Where makeshift bookcases with polythene flaps and storage boxes
Contain the books that, by rights, should still be inside the library;
After all, the council is paying rates to keep the building empty.
I take my pick to read on higher ground,
To William Gladstone’s house, to elevate myself,
But the walls of this grand old house have been brought down.
Because it’s cheaper for the Government to run to ruin
The local spaces that serve a community function.

So, I study the floor plan of the foundations; all the rooms have been
Taken over by grass and feathers, bricks and gravel, and floor lights
(And I bet it looks good at night all lit up like a mini Acropolis.)
But in my mind, I rebuild my favourite room, the cafeteria
With its ribbon curtain to keep out the flies, the lofty counter and the ice cream freezer behind,
Would you like cornets or wafers? Wafers, every time,
We’re a family of six, so we need a big block of Cornish with wafers. I can still taste them.
But, in the present, only one wall has survived the devastation and set within it, a glassless window
Gazes out over the abandoned bowling-green
– not much is left for either the older or younger generation.
If Gladstone stood at his window now he would see the steel cradle of Wembley Stadium.

Why did I return to Gladstone Park?
Because I wanted to show the London Plane trees how much I’ve grown.
They remember when that little slope on the way to the playground
Would tire me out; my limbs are longer, it looks much smaller now.
Where is the witch’s hat, the see-saw and the roundabout?
Health and Safety has put paid to risky pleasure grounds.
But the squeaking swings remain and the new adventure walkways
Are loops of creaking iron chains, carefully traversed by delighted children
Who don’t care that rust is falling off the railings and just the gates are painted red.

The Plane trees have grown too.
In summer, their topmost twigs overarch the path to the playground and become
A living cathedral; flying buttresses formed of leaves and branches above my head.
Only synapsing clouds and the sun, glinting off the slides, are higher than this edifice.

Or did I return to Gladstone Park to say hello to Ken Livingstone, a local resident, don’t you know?
“Sorry you lost the election,” I said. Sorry I didn’t vote for you, I meant.
I didn’t vote for Boris either; my first choice was a Liberal Democrat,
They’ve been so good in Brent.
But second choice Ken is resolute, “More time to spend with the kids,” he said,
“My daughter’s going to cookery school.”
And just like Gladstone’s house was razed to the ground against Ken’s wishes,
The careers of politicians often end up in failure.

In the environmentally contrived ‘long grass area’ I stumble onto a butterfly path,
Their rising wings flap darkly against the tall, swaying, sun scorched rye,
Which hide small dogs from calling owners
And where, a young girl with hair bleached white like Nanny’s,
Can sunbathe in a black bikini, a zip divides her assets.

I spy all of this glorious Gladstone Park life,
Then rest awhile against the trunk of a well-chosen oak tree.
I want to strap myself to it, to meditate and gain strength.
But, always the restless one,
I float on the breeze to Dollis Hill and back again
To watch the sun setting over Wembley:
A sea of fire is spilling across a petrol-blue sky.
Tomorrow it will rise over the minaret in Willesden Green.

On my way again, I’m careful not to tread on dusky bees in clover.
And know myself now as a solitary bee without my family.
And like a bee, I’m attracted to the high-walled flower garden,
Where the scent of yellow roses are, to me, sweeter than white or crimson,
I hone in on marigolds, two-faced pansies, bearded iris and silvery-blue thistles
Whose cupped spiny flower heads are the colour of the Aegean.
I alone can follow my spirit,
And I have found my way back home.